Branch activists joined trade unionists, politicians and community groups at the St Andrew’s Day Rally against racism and fascism at Aberdeen’s Castlegate.Those in attendance held a minute’s silence to remember the victims of the London Bridge atrocity which claimed the lives of two young people.

The rally then moved to the ATUC premises where people crammed in to listen to passionate and uplifting speakers.

We heard from our colleagues in struggle from the CWU and from the UCU, who are both in dispute with their employers. The CWU speaker slammed the intervention of the courts to stop their action and pledged that the union would continue their fight for workers rights. The rally stood in solidarity with these unions. 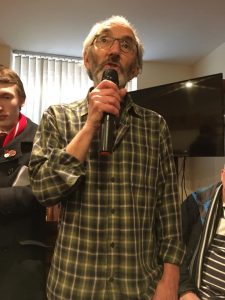 Branch co-chair Steve Gray spoke about a just transition after a young climate change striker had called passionately for irgent action to halt climate change. Steve said that UNISON Scotland is making the case for the Just Transition Commission to become a permanent part of the Scottish Government with funds and a remit to support citizen assemblies and to help/advise the Government on how to deliver the just transition. He called for immediate action if a climate change emergency is going to be avoided.

“Time is running out,” warned Steve, “And the first areas to be affected will be coastal towns and cities – goodbye Footdee, goodbye Stonehaven, goodbye Gamrie….” 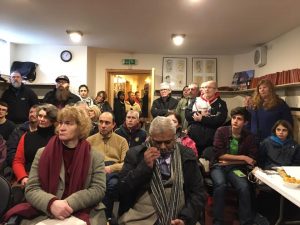 Other speakers condemned the casual racism of Boris Johnson and the demonisation of groups by the Tory government – groups like Windrush generation and migrant workers as well as the poor and those with disabilities. They highlighted the dangerous rise of the far right here and across the world and drew parallels with the rise of fascism in Europe before the Second World War.

All the speakers called on those present to act to challenge division and discrimination and to urgently tackle climate change. 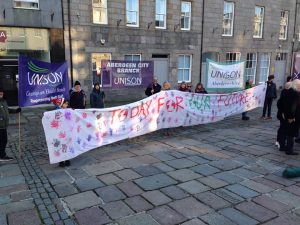