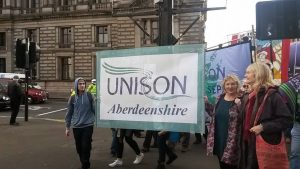 Aberdeenshire UNISON members joined thousands of trade unionists and anti-poverty campaigners in Glasgow on Saturday 18th October to demand a just Scotland with decent work and decent pay, and an end to austerity, child poverty and foodbanks.

The branch banner joined hundreds of others as the march made its way from Glasgow Green to George Square. At the same time tens of thousands marched in London and in Belfast to make the same demands and to call for decent wages and an end to the low wage economy created by this Condem Government.

In Glasgow, the assembled marchers heard from a range of speakers calling for an end to attacks on the poorest and most vulnerable in our country whilst the richest continue to amass huge wealth which could clear the deficit many times over.

Kate Ramsden, Branch Chair said, “The speakers told harrowing stories of the effects of the Government cuts on the most vulnerable; people with disabilities whose benefits have been cut and who can’t get into work; the one in three children growing up in poverty, most of whom have parents in work – a new generation of working poor, on part-time, zero hours or self employed contracts; the young people who can’t find work, the first generation whose prospects will be poorer than their parents.

“However they also reminded us how powerful we can be if we work together for a more equal society. The money is there – we know that. It’s just in the wrong hands and that needs to change.”