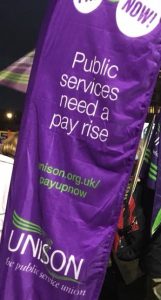 Local services throughout Scotland could be plunged into crisis after UNISON, Unite and the GMB wrote to CoSLA to say they will recommend their members reject their revised pay offer when they consult them in the coming weeks.

The revised pay offer, made by CoSLA on 6th September, was a 3% increase for all local government workers earning up to £80,000, but the trade unions are angry that this is below inflation and does not improve low pay.

Mark Ferguson, chair of UNISON Scotland’s local government committee said: “A decade of austerity has led to staffing shortages in key areas of local government like social care and school staff. And many of our members are relying on foodbanks to get by. The Government and COSLA must do more to address these issues and we would urge them to get back around the table with the trade unions.”

James O’Connell, Unite Regional Organiser said: “Our members are just as deserving as teachers. CoSLA promised parity of treatment and need to deliver it”