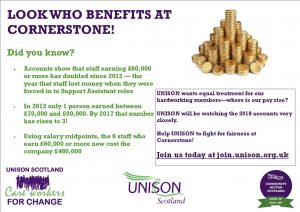 Members will know that after UNISON’s initial concerns over how Local Cornerstone would be implemented, we did see how a properly implemented system could be of benefit to our members.

However, with Cornerstones Leadership’s Teams retreat from the negotiating table, their refusal to make us a pay offer at this late stage, and their continued failure to identify a sensible route forward for Service Managers and Team Leaders, UNISON has to ask who Local Cornerstone has benefitted so far? 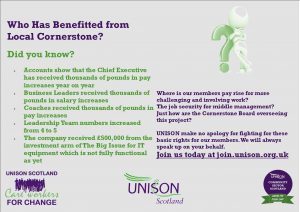 It appears to UNISON that:-

So who has benefitted from Local Cornerstone? Where is our members’ pay rise for more challenging and involving work? Where is the job security for middle management? Just how are the Cornerstone Board overseeing this project?

UNISON make no apology for fighting for these basic rights for our members. We are on our members’ side. We want our members to succeed in Cornerstone. We will always be here to speak up  on your behalf.