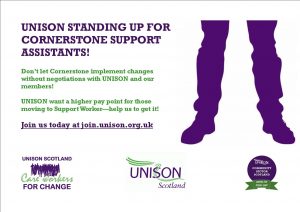 “As you will know, Cornerstone introduced the role of Support Assistant back in 2012, at a lower rate of pay than that which Support Workers earned.

This new role was brought in by Cornerstone due to their insistence that two roles were required and that they were distinct from each other. Cornerstone argued that this was due to the needs of the business. As you know, some UNISON members were forced to accept these roles at financial loss to them.

When the UNISON campaign for a Scottish Living Wage was successful, the pay differential between the jobs was removed….but surely the arguments around business needs remain in the existing model?

Cornerstone are now arguing that the two jobs are the same and that Support Assistants should agree to become Support Workers.

Should Cornerstone consider an element of back pay for any financial loss since 2012?

Cornerstone has indicated that they no longer wish to discuss an agreement with UNISON on this issue. We would urge any members who are affected by this issue to contact us ASAP.

UNISON has been successful in resolving similar issues in other charities where our members become active and involved in the issue. Join us today at join.unison.org.uk