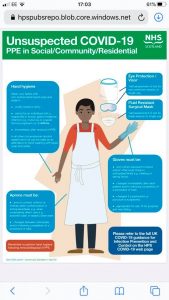 UNISON  met Scottish Government minister Fiona Hyslop on Tuesday 7 April to demand that the ‘supplementary guidance’ is withdrawn as it has serious implications for the health of home and social care staff in Scotland.

The ‘supplementary guidance’ which has only been issued in Scotland, contradicts UK wide PPE guidance issued on Friday 3rd April.and UNISON believes it will put Scottish home and social care workers at greater risk than their UK counterparts.

Original UK-wide guidance, which was issued by the Scottish Government, was welcomed by UNISON. This guidance made clear that home care staff and other care workers should have access to the appropriate PPE to make real-time assessment of the risk associated with the tasks they were being asked to complete and wear the appropriate protection.

However, the Chief Nursing officer supplemented UK guidance, to say that: “Where the person is neither suspected to be, nor confirmed as COVID positive, care at home staff carrying out personal care should wear what they have always worn – that is, an apron and gloves; and no mask.

“This applies regardless of the 2m distance. The same would apply to a community nurse visiting the same client: they too would wear gloves and apron, and no mask. Furthermore, home care workers and community staff going into people’s houses should only wear a mask when they suspect the person has COVID, and they cannot keep a 2m distance.

“If this is not suspected – or if they can keep a 2m distance – then they do not need to wear a mask.”

Johanna Baxter, UNISON Scotland’s Head of Local Government, said: “This guidance must be withdrawn immediately- to put home and social care workers in Scotland at greater risk than their UK counterparts is nothing short of a national scandal. Home care workers are putting their lives at risk every day to care for some of the most vulnerable people in our community. They need and deserve clear guidance and the full PPE they need to do their jobs as safely as possible, so neither they nor the vulnerable people they care for are put at unnecessary risk. There is already serious anxiety by home and social care staff and this is simply making matters worse.

Mark Ferguson, Chair Local Government Committee, UNISON Scotland said “The UK government guidance – also issued by the Scottish Government – on 2 April brought some clarity and safety for home and social care staff, to back track on this now is a dangerous. We already have many home care staff becoming ill and they deserve our protection.

“At a time of crisis it is important that front line workers get clear and consistent advice that they can trust.  The guidance issued last week provided this.  The Chief Nursing Officer’s letter muddies the water and the Scottish government risks losing the confidence of those they need to rely on most right now.

“Our members are putting their lives and wellbeing on the line every day, supporting vulnerable people in need of care. The least they should be able to expect is adequate supplies of PPE and clear guidance on their use.”