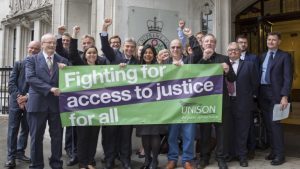 The branch is delighted to report that employment tribunal fees will be scrapped after UNISON won a landmark court victory against the government this morning.

The Supreme Court – the UK’s highest court – has unanimously ruled that the government was acting unlawfully and unconstitutionally when it introduced the fees four years ago.

From today, anyone who has been treated illegally or unfairly at work will no longer have to pay to take their employers to court – as a direct result of UNISON’s legal challenge.

The government will also have to refund more than £27m to the thousands of people charged for taking claims to tribunals  since July 2013, when fees were introduced by then Lord Chancellor Chris Grayling.

Anyone in England, Scotland and Wales wanting to pursue a case against their employer has had to find as much as £1,200. This has been a huge expense for many low-paid employees, says UNISON.

Reacting to this morning‘s decision, UNISON general secretary Dave Prentis said: “The government is not above the law. But when ministers introduced fees they were disregarding laws many centuries old, and showing little concern for employees seeking justice following illegal treatment at work.