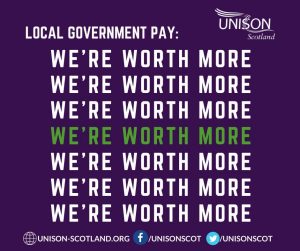 UNISON Scotland has suspended strike action planned for next week by schools and early years members. This means that branch members due to strike from 6-8 September will now work as usual whilst UNISON Scotland will consult all council members on whether they are willing to accept this improved offer. If accepted it will be backdated to 1st April.

The decision to suspend action and consult was taken by UNISON Scotland’s local government committee on 2 Sept after days of intense negations with the First Minster, the Deputy First Minister, Scottish Government and COSLA secured the improved pay offer. We will now put this to our members with a recommendation to accept.

Three UNISON sticking points were overcome. The first is that the pay envelope has been increased to £600m, second that the pay increases will be fully consolidated from the date of implementation and the calculations will be based on 36-hour week (rather 37hr wk).

This offer is a vast improvement from the paltry 2% offered in March and the 3.5% offered in July.  Through the strength of UNISON’s members willingness to stand up to their employers and take strike action, we have now achieved a total increase to the pay bill of 7.5%, with 8 in 10 UNISON workers getting increases of between 5 – 10 %

It’s a vastly improved deal for those earning below £25,000 who will get a pay rise of between 7.2% and 10%. This will now be consolidated into their pay, which means it is no longer a one-off payment and won’t be taken off them after two years. It will form part of their pay into the future and future pay rises will be added to it. This is a huge achievement for our negotiators.

Johanna Baxter, UNISON head of local government said: “This offer is a victory for UNISON members. It has taken 8 months and the industrial might of UNISON members in schools and early years and waste and recycling workers to drag £600m out of Scottish government and COSLA and into the pockets hardworking people.

“UNISON wants to get this money into the pockets of council workers now while we continue the campaign to support people through the cost of living crisis,

“It is only through the collective action of our members in school and early years staff threatening strike action and our waste and recycling workers taking action that we have forced these extra funds out of government and the employer.

“Our member’s message was clear and unequivocal – UNISON’s local government members are no longer prepared to be treated as the poor relations of the public sector. They will stand up, speak up and organise to win change together. There is always more to do but this is a welcome step in the right direction.”

Mark Ferguson, chair of UNISON Scotland local government committee said: “Do not underestimate the scale of the achievement for UNISON members. We have won significant increases from where we started 8 month ago. We have had to drag the employer to the table to even talk to us.

“This will go someway to help them through the cost of living crisis but by no means is the fight over. UNISON will now continue its campaign to improve pay and conditions for all workers in local government.”