Members at this year’s aggregate Aberdeenshire UNISON AGM, condemned the Tory led Westminster government’s failed austerity measures which threaten to dismantle the public services we all rely on.

Members backed the branch in campaigning for decent pay, for a living wage for those in services contracted by the council, for a living rent and affordable housing for all, and for measures to combat austerity and to tackle the growing inequality in our country which “is not just bad for the poorest and most vulnerable, but is bad for the economy too.”

Members also called on the Scottish Government to end the council tax freeze which has cost more than £2.5 billion and benefits the better off the most.

The well attended AGM was held on Wednesday 18th February 2015 across two meetings, the first in Woodhill House over lunchtime and the second in the evening in the Kintore Arms, Inverurie.

Guest speaker, Dave Watson, Head of UNISON Scotland’s Bargaining and Campaigns, told members about the new Local Government Pensions Scheme and what the changes will mean for members.

He explained that although the new scheme is career average, because there is a better accrual rate, most members will be better off, and it is very good news for women and lower paid members. Click here to see Dave’s full presentation.

UNISON will now have places on the boards of pension funds. “This will give us an opportunity to influence pension funds to work for the members and stop the siphoning off of our members’ and councils’ money to so-called fund managers,” said Dave. It will also allow us to influence investment policy and advocate for ethical investments.

Our own James Mulholland will be a UNISON representative on the North East of Scotland pension fund.

Treasurer Ann Gray presented the branch accounts which were approved by the AGM. The surplus has reduced but Ann explained that this is mostly down to the secondment of Susan Kennedy, as Assistant Branch Secretary, a secondment which has been to the great benefit of the Branch as a whole. The branch recorded its thanks to Ann for all the work she does in her own time, and unanimously approved the payment of an honorarium to her.

Inez Teece, Branch Secretary told the AGMs that Local Government is taking a battering from governments both at Westminster and Holyrood.

“We have seen funding for local government slashed in recent years and it looks as if this will be a trend into the future,” she warned.

“All too often we believe the rhetoric fed to us that there is no other option than cuts. But as ambassadors for public services we know the value of what we do. There is no aspect of anybody’s life that council services don’t touch.

“Without us bins would go unemptied, restaurants would be run without food hygiene certificates, our old, young and vulnerable would be without a voice and care, and teachers would have to cope on their own, without the classroom support that is so valued.

“Roads would be unrepaired, houses could be thrown up anywhere. Do I need to say more?

“Aberdeenshire UNISON will continue to do our best for our members but we need you to work with us, because, at the end of the day, you are the union.”

Branch Chair, Kate Ramsden, echoed this when she called on members, “to not just vote for these motions but to go out and spread the word that austerity is a political choice that condemns our children to grow up in poverty and leaves the rest of us struggling to make ends meet, while the richest 1000 double their wealth. This is bad for us, bad for public services and very, very bad for the economy.” 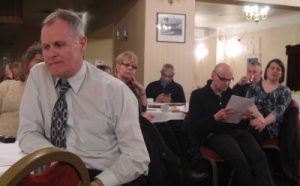