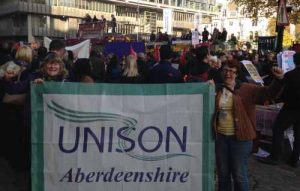 Aberdeenshire branch joined thousands of trade unionists in London on 2nd November in a mass lobby of MPs calling on them to vote against the Trade Union Bill.

Branch Chair, Kate Ramsden was the sole branch delegate after Inez Teece, Susan Kennedy and Steven Gray were left stranded in Aberdeen as fog in London cancelled flights from around the country. 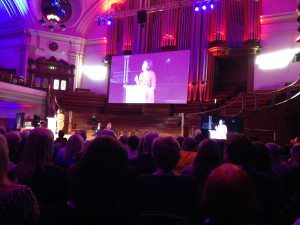 At a packed rally in Central Hall, Westminster, which left thousands unable to get in, speakers from trade unions and campaigning groups condemned the trade union bill. Frances O’Grady, General Secretary of the TUC slammed it as “unfair, undemocratic and unnecessary.”

Shami Chakrabarti of Liberty called on trade unionists to “reject Tory attempts to divide and rule. Trade unionists are members of the public,” said Shami.

Speaker after speaker pointed to the unfairness of increasing ballot requirements for strike action, which would have left only 60 Tory MPs in parliament if applied in the General Election, whilst at the same time refusing the right to electronic balloting.

They condemned it as “draconian” saying that curbs on trade unions would be more extreme than in Franco’s Spain, undermining human rights as well as employment rights.

General Secretary, Dave Prentis had earlier called the bill “a nightmare made on Downing Street,” and tweeted that it was “all trick and no treat!”

“These spiteful proposals will deny millions of ordinary workers a voice at work,” he added.

Please click on the link below and tweet your MP and ask them to oppose this bill.

During the rally trade unionists made their way in groups to the House of Commons to meet their MPs and to call for their support to oppose the Trade Union Bill. Central Lobby was packed with people waiting to see their MP and was abuzz with excitement and enthusiasm as workers took the arguments right into the heart of government.
Alex Salmond, their constituency MP was not in London so he arranged for Deirdre and Kate to meer with Dr Lisa Cameron, SNP MP and shadow justice spokesperson for the party, who had been a member of the bill scrutiny committee.

Kate said, “Dr Cameron was very supportive and told us that the SNP would be voting against the bill.

“Having been on the scrutiny committee and having heard from many interests she told us she can see no reason for this legislation except to undermine the rights of ordinary workers to have a voice at work.”

Deirdre added, “She agreed with us that trade unions have a very important in the workplace to support members’ employment rights but also to ensure their wider health and safety and human rights.”

Dr Cameron pledged that the SNP MPs would do all they can to amend and oppose the bill.

Deirdre and Kate were also fortunate enough to meet Jeremy Corbyn, Leader of the Labour Party who welcomed us to parliament.

He expressed his opposition to the bill and pledged, “solidarity with trade union members from across the country protesting in London this afternoon.”

Like Dr Cameron, Chris Stephens is on the scrutiny committee for the TU Bill. He explained the amendments that the SNP will be tabling to mitigate the worst aspects of the bill. Labour are likely to support these and the SNP will also support Labour’s amendments. The opposition parties are working together to amend or throw out this bill.

Kate with Eilidh Whiteford MP and Chris Stephens MP
Kate said, “Both Chris and Eilidh Whiteford listened to and were familiar with the trade union concerns about strike ballot rules; the refusal to allow electronic balloting; the provision to use agency wokers; the planned removal of DOCAS; and cuts to facility time.

“Like Lisa Cameron they pledged to vote against the bill at all stages, and to work to amend it if that is all that is open to them. They could see no value to the untold damage it would inflict on the trade unions and their members.”